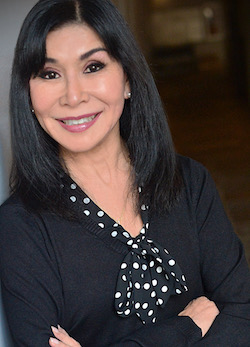 Lily was born and raised in Kobe, Japan. It could be said that entrepreneurship is in Lily’s blood. Her mother imparted to her the importance of personal connections with business, and treating everyone with respect, having owned a successful hotel, fashion manufacturing company, as well as a restaurant herself.

While attending college at the University of Illinois Chicago in 1968 under a full scholarship, Lily worked as a legal secretary, model, and fitness instructor. Upon graduating with honors with a degree in education, she taught in Niles, IL. for several years until she started a family and soon launched the modeling careers for her three daughters, Kristina, Lania, and Kira.

In June of 1983, Lily officially opened Lily’s Talent Agency. The agency expanded quickly to represent talent for print, on-camera, film, theatre, voice-over, and makeup artists. The agency soon became union franchised with SAG, AFTRA and Equity, as well as a member of the Minority Business Enterprise.﻿

In 2002, Lily became the Managing Member of Lidi Real Estate L.L.C., an investment real estate company focusing in residential as well as commercial properties that were inspired with her first success in real estate transaction in 1979.

In 2010, Lily founded and became the president of, Foundation of Artists Mentored in Entertainment, a N.F.P.501 C3 organization, now Mentoring Artists Chicago. The mission is to help deserving young Chicagoland performing artists with financial and mentorship awards to further their passion in the arts and entertainment.

Today, with decades of experience in the talent industry, Lily spearheads one of the top talent agencies in Chicago, a successful real estate investment business, and a non-profit organization that continues to inspire others with her mother’s message: “Go after your passion, work hard, and never give up.”

Lily feels most blessed with God, her family, her dedicated team at Lily’s, and her longtime friends for their love, trust and support over the years.

NOT YOUR AVERAGE AGENCY!

Lily's Talent fulfills our client's needs and exceeds their expectations with both professionalism and personal concern. From major print campaigns and feature films to live productions, our team is a comprehensive network of professionals, ready to ensure success.

Lily's Talent has established an innovative, state of the art networking system with sister agencies and clients throughout the world. We are a SAG, AFTRA, EQUITY, AFM, and WGA franchised agency. In addition, Lily's Talent is MBE (Minority Business Enterprise) certified.

Enter any criteria you wish to search for: